The Society regrets to announce the death of its president, Dr. David Dymond, on 20th August, in his 89th year.  He be 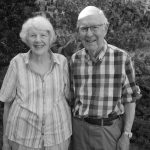 came our president in 2012, following on from Norman Scarfe and served the society faithfully with his leadership, scholarship and advice, all of which will be sorely missed.  For fifteen years he was co-ordinating editor of our annual volumes as well as being a contributor to them and to our Charters volumes.  In 2020 he was honoured with a Festschrift which includes a list of his publications, no less than twenty-three books and fifty-eight articles.  Two more articles since then dealt with minor place-names in Suffolk and the game of camping in Eastern England.  He was the first chairman of the Bury St. Edmunds Society.  He was the vice-president for the Suffolk Institute of Archaeology and History and vice-president for the British Association of Local History.  A fuller appreciation of his life can be found here: David Dymond Appreciation by Heather Falvey

The Society records with deep sorrow the death on the 3rd September 2015 of Professor John Blatchly, a member of the Society’s Council for nearly forty years and its Chairman from 1988 to 2013, a quarter century which, under his guidance, saw the publication of thirty-five annual volumes. He edited two of his own volumes for the Society: David Elisha Davy’s Journal of Excursions through the County of Suffolk,1823-44 (1981) and John Kirby’s Suffolk: His Maps and Roadbooks (2004) and acted as general editor for two others.

Under John Blatchly the Society was fortunate to enjoy for many years the guidance of a scholar of great range and diligence who also brought determined leadership gently applied, unflagging energy and the gift of encouragement to all those around him.

A full tribute to Professor Blatchly by Diarmaid MacCulloch, on his resignation as Chairman, appeared in 2016 in volume 58 Wills of the Archdeaconry of Suffolk, 1627-1628.

Dr Cockayne was a much loved and respected GP in Woolpit, Suffolk for 30 years. He studied medicine at Guy’s Hospital where he met his wife Elizabeth who was a nurse there. He loved playing rugby and in later years he was first Secretary and later President of Bury Rugby Club. The terrible air crash in March 1974 came during that time and he was a tower of strength to the families of the 18 members, supporters and players who died.

On his retirement he took his History of Medicine diploma and over the next few years, together with Noel Stow, retired pharmacist of Lloyds Pharmacy in Abbeygate Street, Bury St Edmunds, set up the Suffolk Medical History Society. They co-edited Stutter’s Casebook, 1839-1841 [Suffolk Records Society volume 48] in 2005. Dr Cockayne also expanded the work done by the late Dr David van Zwanenburg to make a comprehensive record of the medical practitioners in previous centuries which is available at www.suffolkmedicalbiographies.com.

Christopher Harper-Bill FSA died on 8 September 2019 aged 71. He was elected a Fellow of the Society in November 1983.  Harper-Bill was Emeritus Professor at the Centre of East Anglian Studies, University of East Anglia, where he taught the history of Western Europe, 1000–1520 and pursued his interests in English Ecclesiastical history, cartularies and Bishops registers. He previously taught medieval history at St Mary’s University College, Twickenham. His doctoral thesis at King’s College London (1977) was on An Edition of the Register of John Morton, Archbishop of Canterbury 1486–1500, with Critical Introduction.

In 1988 he joined the Council of the Suffolk Records Society when he succeeded the late Dr R Allen Brown as Honorary Editor of the Suffolk Charters Series. He had already contributed to this series with Blythburgh Priory Cartulary (1980, 1981) and Stoke by Clare Cartulary (with Richard Mortimer, 1982, 1983, and 1984). As editor-in-charge until 2006 he oversaw a further eight volumes, contributing three more himself: The Cartulary of the Augustinian Friars of Clare (1991), Charters of the Medieval Hospitals of Bury St Edmunds (1994) and Dodnash Priory Charters (1998).

Other edited books include A Companion to the Anglo-Norman World (with Elisabeth van Houts, 2002), Medieval East Anglia (2005) and Henry II: New Interpretations (with Nicholas Vincent, 2007). He edited the Episcopal Acta of the bishops of Norwich 1070–1299 in five volumes (1990–2012). He edited Anglo-Norman Studies (which Boydell & Brewer promotes with the line, ‘No single recent enterprise has done more to enlarge and deepen our understanding of one of the most critical periods in English history, Antiquaries Journal’) and (with Ruth Harvey) Medieval Knighthood, containing papers from occasional Strawberry Hill Conferences.

He was also a Fellow of the Royal Historical Society.

Dr Antonia Gransden, editor of Suffolk Records Society’s Volume 5 and sometime subscriber to our Charters Series, died on 18th January aged 91. She was a distinguished medieval historian and an expert in the field of medieval chronicles. For much of her academic career she was Reader in Medieval History at the University of Nottingham.

In Suffolk she will be remembered chiefly for her two books on the History of the Abbey of Bury St Edmunds, 1182-1256 and 1257-1301, published in 2007 and 2015. Her volume for the Suffolk Records Society, published in 1963, was entitled The Letter-Book of William of Hoo, Sacrist of Bury St Edmunds 1280-1294, a record of Hoo’s activities as sacrist of the abbey, archdeacon of the town and papal agent. A year later she published The Chronicle of Bury St Edmunds 1212-1301. In 1973 she published The Consuetudines Buriensis, the customary which laid down the rights and duties of the abbot and his obedientiaries, concerning the special needs and circumstances of the abbey, following the Rule of St Benedict. Her other major contribution to Bury was her publication of the transactions of the British Archaeological Association’s conference held there in 1994, which includes twenty scholars’ papers on medieval art, architecture, archaeology and the economy in and around Bury. She wrote over a dozen other articles on the history of the abbey and she contributed a dozen biographies of its abbots to the new Oxford Dictionary of National Biography.  Her last visit to Bury was probably in 2012 when she spoke at the end of a conference on Bury St Edmunds and the Norman Conquest.

She published the customary of Eynsham Abbey (Oxfordshire) and manuscripts from several other monastic houses; and she wrote two volumes on historical writing in England from c. 550 to the early sixteenth century. She wrote one historical novel, Last Days at Lanercost. The Priory and Brother Thomas in Border Warfare. Only M.R. James’s writings of around 1900 have approached anywhere near to the amount of information she has given us on the history and life of Bury St Edmunds Abbey seen through its surviving manuscripts.

Canon Roger Job was a boy chorister of Canterbury Cathedral and then a choral scholar of Magdalen College, Oxford where he read history. After working in Liverpool and a parish near Wigan, he became Precentor of Manchester Cathedral in 1970. After four years he was invited to become Precentor and Sacrist of Westminster Abbey and while there had to arrange the state funeral of Earl Mountbatten in 1979. Later he moved to Winchester Cathedral as Canon Precentor and Sacrist, becoming Vice-Dean in 1991. After his retirement in 1994, he took services in local churches, assisting occasionally at Winchester Cathedral and sometimes at the royal chapel in Windsor Great Park when the Queen and other members of the royal family were present.

He joined the Council of the Suffolk Records Society in 1995 to assist the Membership Secretary, Mrs Brenda Dykes, as Covenant Secretary and took over from her in 1999. He earned the acclaim of Council by persuading over three-quarters of the Society’s membership to sign covenants, later to become Gift Aid, thus contributing significantly to the Society’s income. He had a strong and wry sense of humour and while he took great pains over the Society’s members, he could always be relied upon to skewer pomposity and dispel clouds of hot air. He resigned from Council in 2009.

Bill Serjeant was Hon. Secretary of the Suffolk Records Society for seventeen years from 1970 to 1987, having previously held a similar position with the Thoroton Society in Nottinghamshire, of which he had been County Archivist from 1962. At the SRS, working alongside some of the great names of Suffolk history – Norman Scarfe, Geoffrey Martin, Leslie Dow, David Dymond – he made an invaluable contribution to its development.

After retirement, he continued to work for archives and local history in Suffolk, remaining as a Council member of SRS until 2009 and acting, for many years, as Honorary Archivist to the Tollemache and de Saumarez families.

Joy Rowe, who has died a few weeks short of her 94th birthday, was a founding member of the Society. She remained as a Council member until 2008 and was then invited to become a Vice-President. She was an honoured guest at the 60th anniversary celebrations of the Society in 2017.

The Rowe family moved into Ixworth Abbey in the early 1960s and Joy became an expert in securing grant and other funding from various bodies to continue the restoration of this important house and the associated ruins of the Augustinian Priory. Her whole life reflected her interest in and love of history, whether teaching at Hengrave Hall, working as an archivist at West Suffolk Record Office under Martin Statham, researching and writing many books and articles. She was an active member of many societies including the Suffolk Institute of Archaeology and History and for many years was on the grants committee of the Suffolk Historic Churches Trust. She was elected a Fellow of the Society of Antiquaries in 2002.

Joy Rowe’s research covered the early modern history of Catholicism in East Anglia, drawing attention to the families of recusants and their networks of chapels and travelling priests. Her work on recusancy led to many contributions to books and journals including the Norfolk and Suffolk historical atlases as well as eight entries in the Oxford Dictionary of National Biography. In 2016 Joy was the General Editor of the Society’s volume 59 Rookwood Family Papers, 1606-1761, edited by Francis Young.

For much of his career he was senior lecturer in history at Portsmouth College of Education but he will be remembered as an historian of Ipswich and particularly of maritime Ipswich in the later medieval period. He published his first article in the Mariner’s Mirror, ‘William Sabyn of Ipswich: an early Tudor sea officer and merchant’, followed by ‘Apprenticeships in the maritime occupations at Ipswich, 1590-1651’ in the same journal and ‘Elizabethan piracy: the evidence of the Ipswich Deposition books’ in the Suffolk Review. His latest article which was in volume 38 of the Suffolk Proceedings for 1993 had the lively title, ‘Peter Moone of Ipswich (d. 1601) a Tudor tailor, poet and gospeller and his circle’.

In Great Tooley Webb examined how an early Tudor merchant lived and worked, asking how he organised his overseas trade and distributed the goods he imported, what part he played in the civic life of Ipswich, and having achieved success, how he used the wealth he had accumulated. Tooley’s magnificent memorial brass is now in Christchurch Mansion and the almshouses which he founded and bear his name survive in Foundation Street.

In Poor Relief Webb edited records to make one of the most illuminating social studies of an Elizabethan town then undertaken, showing how Ipswich tackled the problems of poverty in the half-century after the dissolution of the monasteries, beginning with the work of the Tooley Foundation, set up after his death in 1551, and ending with the census of the poor in 1597, which describes the resources and needs of each distressed family in the town.

The treasurers’ and chamberlains’ accounts which are transcribed in Town Finances illuminate the administration of one of the ten richest provincial towns, providing further insight into its social and economic life. John Webb’s name will forever be linked with the history of sixteenth-century Ipswich and the Suffolk Records Society is now considering how best to commemorate him in spending his generous legacy.