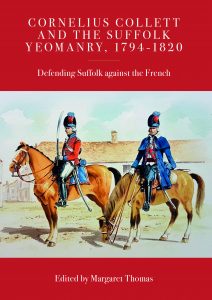 Cornelius Collett was a banker from Woodbridge who answered the call to join a volunteer cavalry group put together to defend Suffolk against possible invasion from the French revolutionary armies.

Volume 63 of the Suffolk Records Society General Series is due for publication in May 2020.

With the invasion by the French revolutionary armies thought to be imminent, in 1794 a county-wide subscription was raised of Suffolk Gentry, farmers, tradesmen, and professionals.  They formed themselves into a volunteer and part-time cavalry – the Loyal Suffolk Yeomanry Cavalry.  Cornelius Collett, a banker from Woodbridge, joined his local troop in 1794 and remained a member for the next 26 years. During this period he collected and transcribed a range of unique and wide-ranging documents such as letters, order, evacuation plans, and details of musters.  Collett also gives details of the Yeomanry’s secondary role aiding the local authorities in case of civil unrest at home;  a factor that became more important due to economic hardship during this period.  Edited by Margaret Thomas.